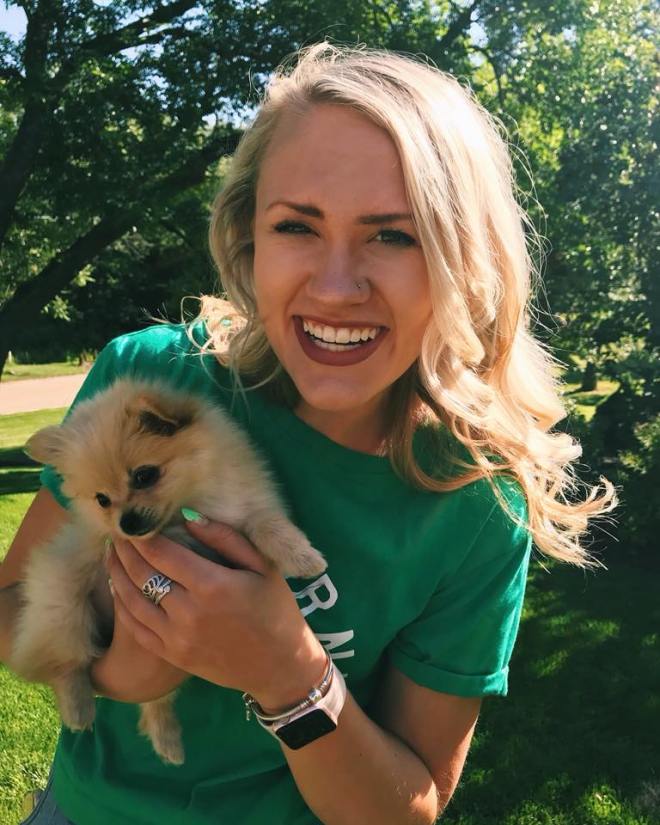 Having a dog is kind of like having a toddler (but much less painful and time consuming obviously), and my Pomeranian puppy is no exception to this adorable annoyance. Piper likes to be cradled, likes to tear up random papers, and likes to splash around in her water rather than drink it. She whines when she’s tired, she cries when she wants attention, and she is pretty much helpless altogether (even though when she’s on a rampage it doesn’t seem like it).

I have an entire board on my Pinterest dedicated to babies and dogs. And because of this board, appropriately titled “CUTENESS” (I made this Pinterest in middle school okay?!) my feed popped up with a picture of a cuddling Pomeranian puppy. I thought my eyes were deceiving me, because surely this tiny creature couldn’t be a living thing. It was a dust ball found under the couch! Upon closer examination, I realized that I was mistaken – these animals were real, existed, and it was my destiny to have one.

Keep in mind, I was 18 and living in a college dorm when I decided this. However, with plans to move into a dog-friendly apartment, I was determined – and if you know me, once my mind is made up, there’s no turning back.

It actually was easier than I expected to convince my mom – just Google Pomeranian pictures or gifs. She was as hooked as I was! And my father has come to realize at this point in his life that there was no stopping my mom and I, a deadly duo when we set out to achieve something.

We knew that we wanted this puppy to be authentic, and raised in a loving and sheltered home. Having accidentally witnessed a puppy mill first hand as a young teenager (it was finally shut down and exposed this year), I was scarred for life. Finding a reputable and caring breeder should be an obvious, but an often overlooked thing, and I was determined to find the perfect and loved match.

Fast forward to a few Internet searches every day for almost two long and hopeful months, I found a website of a woman who breeds Pomeranians, and happened to have a liter that was for ready for adoption at the beginning of summer. Ignoring the fact that this woman lives near the Canadian border, once we began communicating, the deed had been done – I was going to get one of her two cream-colored baby girls.

However, there was a catch. She had an identical sister, and every photo I was receiving was of the puppies together. My heart sank at the thought of separating them, but like a sign from heaven I got a text message from my aunt. She had seen the pictures (all the doing of my mother), and she wanted the twin sister. 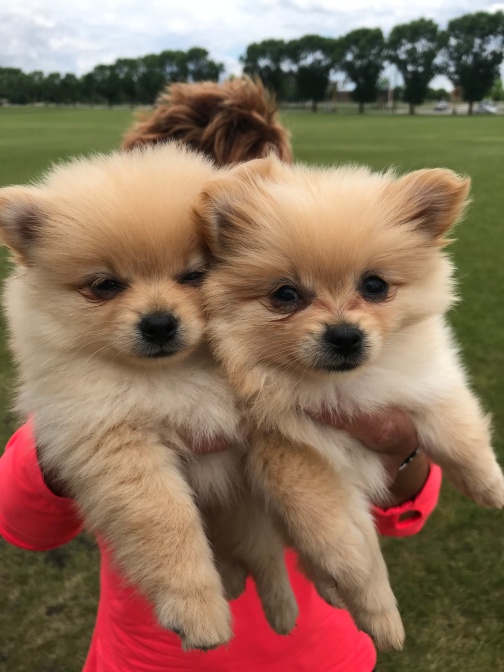 Fast forward again, I’m living back in Omaha for the summer, eagerly waiting for the due date of when the puppies were ready to come home. My mom, aunt and I had booked the hotel, packed the car, and loaded up on the road trip essentials. 48 hours later, 20+ of those hours spent in the car, we brought our babies home – Piper and Poppi.

As I write this, Piper is napping next to my chest, her little face so sweet and pure. She has made so many friends in Omaha, in Lawrence, at the University, and online (I mean c’mon, who wouldn’t follow this page? ). Having a dog is a long commitment, a testing one for sure. Potty training is still being taught, little dogs tend to bark more high pitched and frequently, and she has daily needs just like everyone else.

But if I’ve learned one thing from the process of having my own Pomeranian puppy, it’s how much love a dog can truly give. I’ve written about it before, but it’s a different connection when it’s just between you and your puppy. I know that Piper will be at my side for many events in my life, as the 20s and 30s can be the most life-changing years.

But be prepared for every challenge and difficult hour that undoubtedly comes. It’s not easy, but every puppy kiss, warm snuggle, and tiny bark is worth it. And if this all sounds too cliche for you, just come hang out with me and Piper for an hour, and you might change your mind.

Happy birthday to one incredible podcast host! Miss Corona won’t be holding you back long, and I know 22 will be your year! ❤️ xoxo
If I buy enough tapestries to fully cover the wall, maybe I can imagine this quarantine is on a tropical beach somewhere 🌊
Taking advantage of a little extra free time and some fresh air 🌸🌾
Follow illiterateblondes on WordPress.com