I’ve mentioned before how I like the rain. Especially when I was little. I have this one memory of a rainy day, and I’m going to start this off by telling you about it.

It was late July, and had down-poured for a majority of the morning and afternoon. The sky was a dark gray color, the air was muggy and hot. My brothers and I tried to partake in “fun” rainy day activities, which usually consisted of a few things. Playing a game for a very short span of time, bugging my mother, camping out in front of the television, and whining about how bored we were.

By dinner, we were shocked to look out the window (for the forty third time) to a new world. To a couple of kids, it was like magic. The rain had stopped. The sky was more of a green-yellow, pea-soup kind of color, which combined with the setting sun, had caused the atmosphere to be something we had never seen before.

We dashed out the door, and ran around the yard, burning the energy that had been building up. The sticky air seemed to cling to our skin, but we didn’t mind. My parents had come out onto the porch and were looking around at the sky.

“Guys! Look above the trees!” My dad pointed and all three of our heads whipped around. A ginormous, colorful rainbow was hanging in the sky, adding to the magic in the air (see what I did there).

Even to this day, my sixteen year old self will pull over to take a picture of a rainbow. They’re just such a special thing, and it’s always amazed me that the sky can be so many differnt things at one time. 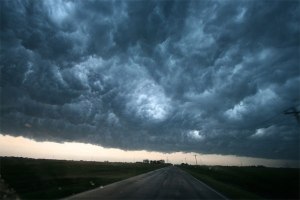 One of my favorite quotes is from The Perks of Being a Wallflower, a unique, slightly depressing movie. It goes,

“I am both happy and sad at the same time, and I’m still trying to figure out how that could be.”

I think pretty much every person can relate to this quote at some point or another. Believe it or not, it is possible to be a whorl-wind tsunami, hurricane, tornado, thunderstorm of emotions all at the same time. And no, not just us teenage girls feel this way.

We are all so much like the sky. Always changing. But the most important thing to remember, is that nobody gets to chose what color the sunset will be, what percent humidity is in the air, how many clouds are floating around. Sure, it’ll affect our day. We might not get to go swimming, or sledding, or tanning. But we can’t control the weather, and I think it’s time we stopped trying to.

My parting note to you my friends, is this–

Stop trying to control the storm. It’s okay to feel happy and sad at the same time. It’s okay to embrace the swirling mix of colors you feel. It’s okay to accept the fact that people change, and you can’t control that. Just enjoy the colors while they last.