Now Mom’s may be the backbone of the world, but dad’s are the assistance we all need when our backs start to ache.

By assistance, I mean a few things.

A dad is someone who you can call at two AM when you’re lost in the middle of nowhere.

A dad is someone who always has a few spare dollars when you want candy from the gas station.

A dad is someone who coaches just about every sport you do, that way you don’t have to feel bad when you suck.

But being a dad is so much more than that. Growing up, a dad is the first male figure you have in your life, and I’ve picked up on a few things about what it means to be a dad.

Being a dad means…

Falling asleep with a beer in hand on the couch.

Throwing the baby high enough in the air that Mom screams.

Yelling a clean version of profanities at the cars in front of you as you rush the kids to daycare.

Having an office decorated with drawings of pink flowers and sunshines.

Watching Disney movies and almost tearing up when the dog dies.

Singing “In The Air Tonight” by Phil Collins at the top of your lungs.

Spilling popcorn in the couch cushions when you jump up because your team scored.

Throwing on a hat so you don’t have to deal with your hair that day.

Fixing every toy, door hinge, and broken chair that the kids have destroyed.

Hand washing your car because you don’t trust anyone else to not scratch the paint.

Being told by your wife that your sandals and khakis do not match.

Accidentally hitting one of your children in the face when playing catch and making them hold a package of frozen peas to it.

Dealing with every technology problem that your family has.

Burning the toaster waffles when its your turn to make breakfast for the kids.

Having to politely wave at the neighbors even though their dog barks until one in the morning.

Checking your watch every three minutes at your kids’ violin concert.

Telling dad jokes that you find hilarious, but your wife does not.

Spending hours flipping hot dogs and burgers, only to be told by your child that their hot dog has “too much black”.

Waking up to find your toes covered in pink sparkle polish.

Finding out that the football game didn’t record, and Spongebob Squarepants did.

Constantly telling your kid to “rub some dirt on it”.

Stepping on a Lego in the middle of the night and holding back a scream that would wake the neighbors. (even though they probably wouldn’t be able to hear it due to the damn dog that was still barking)

Having to hide your favorite kind of crackers in a spot the kids can’t reach.

But most importantly, being a dad means loving your kids at the end of the day, even if they threw a baseball through a window, ate all of your crackers, and constantly spend your money.

We appreciate all you dad’s of the world, thank you for always being the assistance we need, and keep telling your jokes, I think they’re funny. Happy Father’s Day! 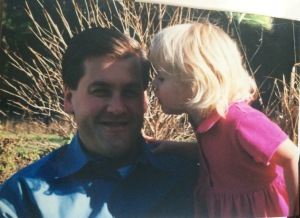