I would like to say that I am always a productive person, but I couldn’t lie to you. I waste a lot of time doing pointless things. For example, whenever I go downtown, I have to stop and look at every building, every brick, every pigeon. It’s just the way I’m built, I’m an observer. But this also wastes a lot of time, and if we’re late, I have to physically be pulled through the streets.

My biggest pet peeve is when people waste my time. I like people who get to the point, less is more. I would love to hear yet another story about your brother’s roommates’ cousin’s great-aunt, but I have places to be, things to do.

I have been this way since I was little, I ran on my own schedule. Now that I’m sixteen and a half, I have a more strict schedule than what Blue’s Clues episode I wanted to watch after lunch.

Speaking of being little, it feels like just last week that I was sitting on the floor of a pre-school and counting on my fingers. Ten something years later and occasionally I still have to use my fingers to count, but that’s besides the point.

My baby brother is turning fifteen tomorrow. He’s taller than me now. SINCE WHEN DID THIS HAPPEN? We used to ride side by side in a double stroller while my mom pushed us up hills, laughing and drinking juice boxes. Now he rides shotgun while I drive to get milkshakes and sing to loud music.

There was this one time I pushed him out of a dog door. I also sat and laughed as he got locked in the car at the park while the babysitter frantically called for help. I’ve hid in his closet, under his bed, and around corners more times than I can count. I scare the living daylights out of the poor child. He falls on the floor screaming most of the time.

Not much has changed. 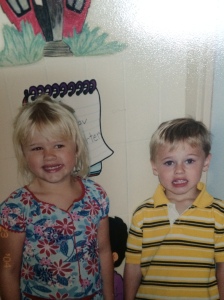 What I’m trying to say here, is that time is the most precious gift you’ll ever receive. Every second is an opportunity to change your future, and remember your past. But most importantly, live in the now. Don’t waste your precious seconds, because in what feels like the blink of an eye, your baby brother is fifteen and taller than you.

Make the most of your day, it’s the only June 7th, 2015 you’ll ever have in your entire life. Enjoy the little things, like stopping to look at the pigeons. Because time flies when you’re having fun.